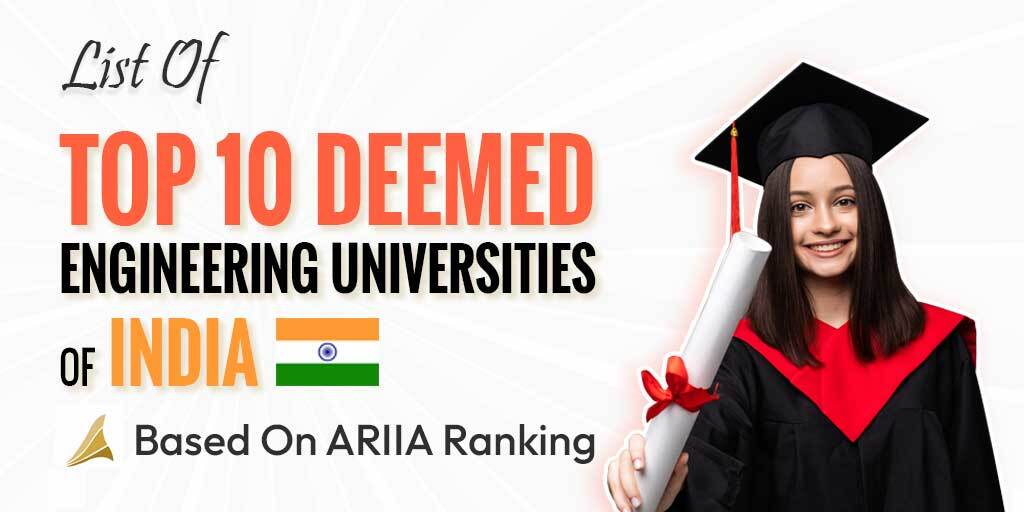 Engineering or technology fields offer many different specialties, including programming, data administration, and more. There are millions of students in India who prepare for entrance exams every year in order to get admission in the top colleges of India. There are 4282 engineering institutes in India, However, it is very difficult for students to identify which is the best for them.

To help aspirants to know about the best & top Technical University & Deemed University in India, the ARIIA (Atal Ranking Of Institutions On Innovation Achievements) has prepared a ranking list based on the major parameters set by ARIIA ranking. The ARIIA is a national ranking system initiated by the Ministry of Education (MoE), Govt. of India.

Kalinga Institute of Industrial Technology is a private deemed university that offers various technical UG courses to the students. Admission in this college is taken based on the KIITEE (KIIT Entrance Examination). In the ARIIA 2021 ranking of Technical University & Deemed University the Kalinga Institute of Industrial Technology secured first rank (1st). This university also provides scholarships to the students who do not have much financial support.

Lovely Professional University has more than 30,000 students, over 4000 faculties and staff, offering more than 200 programs. There are various engineering courses in this university that can be chosen by students after completing their 12th (Intermediate). It has collaborated with Tech Giant Google to offer Android Programming courses to their engineering students and that is without taking any extra fee. Also, various UG candidates have got salary packages of 42 lakhs and more by the top tech giant companies such as Microsoft, Google, and more.

This university also offers scholarships upto Rs.6 Lac. Students who want to win the Rs. 1 lakh Study Grant From LPU can register themselves for LPUNEST. Currently, the university is offering discounts on the application form.

To get the discount on the application fee you can use the coupon code [ LPUCYV631 ] and can get upto 70% discount. Read More

SRM Institute of Science and Technology is a privately held university which has a total of 7 campuses across India. It is one of the top engineering colleges of India that has more than 20,000 students and more than 2600 faculty in various different programs. The highest package which was offered to the students of SRM is INR 41.6 LPA.

In the ARIIA ranking Pandit Deendayal Petroleum University has secured 5th rank. It offers admission to the students in various courses of engineering. This university accepts the JEE Main as well. Highest salary package which was offered to the PDPU is INR 19.20 LPA.

Kalasalingam Academy of Research And Education institute is popular for its B.Tech courses. It is situated in Krishnankovil, Tamil Nadu. It is in the 6th rank in ARIIA Ranking and it has constantly been in the top ranks of various ranking bodies. Admission to this university can be done through various entrance exams and on the basis of a merit list.

Chandigarh University which falls under top 10 rank of ARIIA and has secured 7th rank in the top list is a private college established in 2012. 200 and more than this number of courses are offered in this university. This institute is popularly known for the engineering courses.

Amity University ranks 9th in the ranking list which was done by Atal Ranking Of Institutions On Innovation Achievements. This university is located in Noida, UP.it was established in 1986 now it has become a very huge brand in India. TV actress Kratika Sengar, author Amisha Sethi, and a few more are Notable alumni of Amity University.

Symbiosis International a multi-campus private deemed university that is located in Pune, Maharashtra. This college accepts the national level entrance tests such as JEE Main to give admission to the candidates. It is among the top universities of India which offers engineering courses. SIU secured 10th rank in ARIIA Rank 2021.

Scholarship 2022: 3 Scholarship Programmes You Can Apply To By February